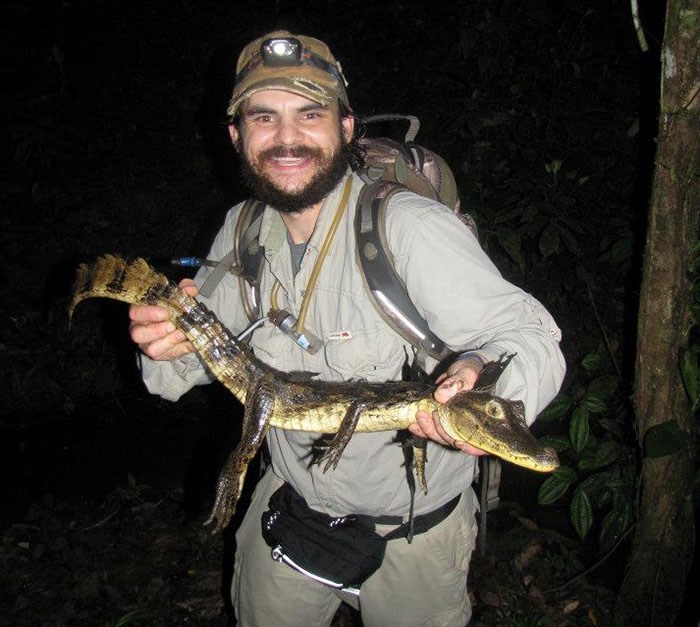 LAWRENCE — Stephen Baca’s path to earning a prestigious National Science Foundation Graduate Research Fellowship and becoming a world “authority of consequence” on the aquatic beetle family Noteridae was anything but a straight line. 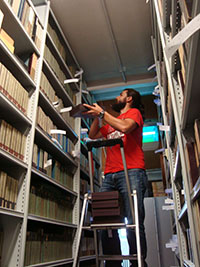 He grew up the son of a Hispanic-American restaurant owner in small-town New Mexico, where his family has dwelled continuously since the early 1800s, long before the region was annexed by the United States. As a boy, Baca was hardly exposed to the idea of a science career — yet found himself drawn more to the natural world than ordinary childhood pursuits, like sports.

“My parents would tell you I loved things like catching lizards, snakes and bugs and went to the library and got all the books about them,” he said. “My dad used to coach our little-league team, and it got boring in the outfield. When the ball would finally get hit to me, I’d be on my hands and knees looking for a spider. ‘Get your head in the game,!’ my dad would yell. But, sorry, baseball is boring — this spider is cool.”

Baca’s family was a source of support for his growing fascination with biology.

“Mom was the one who would take me to the library when I was a kid,” he said. “And even though my dad would be frustrated by me playing with bugs in the outfield, he and my mom had my back at every step and without condition. They never asked that I do anything with my life that I didn't want to — except as a kid when they made me go to school. My grandparents, aunts, uncles, cousins, the same. They taught me all about hard work and dedication but encouraged me in all my endeavors.”

After high school and a bit of college as a business major, Baca dropped out and “bummed around” for a few years. “Actually, I hated school,” he said. “It was boring.”

For a few years, Baca drifted through occupations and places.

“I worked a lot of different jobs,” he said. “Roofing, landscaping, bartending or waiting tables. I worked on a ranch in Montana for a while. Having been raised in the restaurant business, food service was always my go-to.”

He cobbled together enough credits for associate’s degree through coursework at a community college and transferred to the University of New Mexico, where he started to feel a pull toward the study of biology. But it was during a trip to visit Kenya where his boyhood love of entomology came rushing back.

“I saw these crazy insects up close —  it was my first out-of-country trip, and it had a profound impact on how I wanted to take my career,” he said. “I said, ‘I think I want to do entomology.’ Eventually, my professor at UNM offered me a volunteer position in his lab, a chance to help out with research — and then he and other students encouraged me to apply to grad school.”

In the lab of UNM biologist Kelly Miller, Baca befriended a graduate student who had previously studied at KU in the lab of Andrew Short, associate professor of ecology and evolutionary biology. Within a few years, Baca found himself in Lawrence, pursuing a doctoral degree in Short’s KU lab, where he focuses his research on Noteridae aquatic beetles.

“You can find my family of beetles distributed worldwide except for Antarctica,” he said. “They like tropical areas like Africa, South America and Asia. Their diversity in Florida isn’t that bad if you dig around. There are even some really interesting species that live underground. If you go to Japan, you could tap a well into an aquifer, filter the water coming up and find these blind little beetles living in the subterranean aquifer.”

Recently, Baca was lead author of a definitive parsing of the evolutionary history of Noteridae, appearing in the peer-reviewed journal Molecular Phylogenetics and Evolution.

Along with co-authors Short and Emmanuel Toussaint of KU and Miller of UNM, Baca determined the relationships of 53 species of Noteridae representing all subfamilies, tribes and 16 of 17 genera within the family. By sequencing and comparing DNA sequences, the team’s work has led to a “comprehensive phylogenetic reconstruction” of the evolutionary history of the aquatic beetles.

In the process, Baca and his co-authors uncovered faults in a computational method for partitioning genetic data for subsequent analysis and reconstruction of evolutionary histories using said genetic information. The method was only just gaining traction.

“My research pointed out a flaw in a partitioning method that could have led to inaccurate results down the road,” he said. “Comparing partitioning strategies isn’t a common practice when reconstructing evolutionary histories. This method had been getting credibility among scientists. It basically saved people who aren’t doing comparative analysis from using a flawed method.”

After Baca and his team sent their findings to the creator of the partitioning method, he decided the model was to be discontinued.

“Our paper was kind of a final nail in its coffin,” Baca said. “We opened a can of worms, but it shows that science is very self-correcting.”

If all goes according to plan, Baca will earn his doctorate from KU in 2019 or 2020. In the meantime, he’ll be in the field and in the lab, further investigating Noteridae. So far, he’s described a new genus with two species previously unknown to science. Further, he said he has “at least a dozen” that he plans to name and describe by the time he earns his doctoral degree.

It’s a long way from the sandlots of New Mexico’s little-league baseball. But Baca is doing his utmost to stay true to his roots and pave the way for other researchers from under-represented communities in science.

He’s the current president of KU’s chapter of the Society for Advancement of Chicanos/Hispanics and Native Americans in Science (SACNAS). It’s a commitment that stems from his time tending bar back in New Mexico, when his own scientific future was less than certain.

“I got involved through Maggie Werner-Washburne at UNM, who was the president of the whole national society,” he said. “I knew her through a restaurant in Albuquerque. I was working, and she’d come in to eat and have a beer. One day we were talking and I said, ‘I’m a biology student.’ She answered, 'I’m a professor of biology.’ Eventually, I asked her to write me letters of recommendation when I was applying to KU and the NSF.”

The professor agreed, but with one condition, Baca said.

“She said, ‘Fine, but I want you to attend a SACNAS meeting,’” he said. “I didn’t know why, but after I headed here, I joined to help with this outreach-to-minority work. We advocate for Chicanos and Native Americans in STEM fields, and that’s pretty much the demographic of my hometown.”