LAWRENCE — It’s easy to mistake the reclusive amphibian called a caecilian for an earthworm. Both pass their lives mostly underground, squirming through dirt and mud with long, segmented bodies. But on closer inspection, the caecilian has eyes, mouth and teeth — a face. 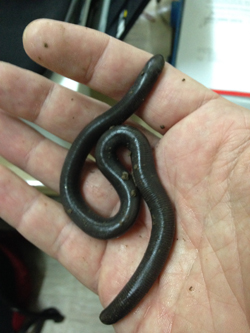 Although caecilians exist all over the world, a very rare species was discovered and first described by University of Kansas herpetologist Edward Taylor about 100 years ago on the Philippine island of Palawan. It was dubbed the Malatgan River caecilian.

In recent decades, however, the Malatgan River caecilian had pulled a disappearing act.

“We have been looking for this species since 1994 with a serious, targeted effort,” said Rafe Brown, current KU professor of ecology and evolutionary biology. “Ever since Taylor found it, only a few other specimens have ever been discovered. In the 1970s, a couple were found — but none since.”

Indeed, for the past few decades, the Malatgan caecilian was included in “most-wanted” lists compiled by conservationists. Several years ago, a research mission that returned to Palawan with the sole purpose of finding the caecilian in the same spot where it was first discovered by Taylor came up with nothing.

Brown said searching in the field for the long-missing caecilian was a slog.

“Caecilians live underground in really muddy places like river banks, some of the hardest places to work,” Brown said. “You have to slosh around and dig randomly with a shovel, looking for mud with the right consistency, really waterlogged, and you sink down into it as you work.”

In recent years, Palawan was off-limits to researchers for bureaucratic reasons associated with the restructuring of the local government unit’s natural resources management body.

But as curator-in-charge of the Herpetology Division at KU's Natural History Museum and Biodiversity Institute, Brown remained doggedly on the hunt to rediscover Taylor’s caecilian. Last November, Brown was at last able to return to Palawan with the Philippines-based Centre for Sustainability. The group’s mission was to catalog the island’s biodiversity.

“It was more of a systematic survey, and we were farther north on the island than we had been before — not where the Malatgan River caecilian had been seen previously  — and we hadn’t really been trying to find it.”

But in the course of the fieldwork, Kester Yu, a student volunteer learning about herpetology, encountered a specimen he thought might be the mysterious caecilian.

At first, Brown was incredulous because Yu found the creature far away from its known range and not tunneled deep in the kind of wet mud Brown and colleagues had thought was its chief habitat.

“This specimen was found 20 meters away from a river, in dry leaf litter by a tree,” Brown said. “They spend most of their time underground in a subterranean cavity and need water to breed and lay eggs.”

Brown, who wasn’t at the scene, suspected that Yu perhaps had found an earthworm species. He arranged to meet the student at the National Museum in Manila the following day to examine the live specimen.

“Yu said, ‘Come to the museum, I’ll show you,’” Brown said. “We were skeptical. He had brought a small aquarium with the supposed caecilian, and he took out a live earthworm instead.”

“I was about to break the news to him that he had collected an ordinary worm, but then he smiled a giant smile and said, 'Wait ... there’s one more.'”

It was a put-on. “Then, he pulled out the Malatgan River caecilian and put it in my hands — a great memory for me. Kind of a ‘bucket list’ moment,” Brown said.

Brown’s two-decade-long quest to find Taylor’s caecilian was fulfilled at last, completing a circle between the mysterious species and KU herpetologists that spans a century.

In a coincidence, the group also found a toad called Pelophryne albotaeniata that had been lost to science for 40 years during the same expedition.

The Palawan Council for Sustainable Development, Global Wildlife Conservation, the Amphibian Survival Alliance and the Rainforest Trust supported this work.